Gil Garcetti is a professional photographer and UNESCO-IHE Cultural Ambassador. He is the former Los Angeles District Attorney and father of Eric Garcetti, the current mayor of Los Angeles.

Gil Garcetti’s mother came to Los Angeles after his grandfather was killed in the Mexican Revolution. ‘My farther was a barber; my mother was a meat packer. I grew up in South Central, Los Angeles. As a lifelong Los Angeleno Gil has seen the constant evolution of the city. ‘Los Angeles has physically changed tremendously. I was LA County DA and that county is bigger than 43 states in terms of population. Right now is a perfect time to keep an eye on Los Angeles. Things are happening. The hope for the future is that this city will be seen as a forward thinking entrepreneurial marvelous city to do business and raise a family.’

Gil believes the light rail being installed connecting Santa Monica to downtown LA is just the beginning of a transportation revolution for Los Angeles. ‘We are understanding that cars are not the answer, we must have public transportation to move people a round. People understand to move around and take advantage of Los Angeles is more than simply using your car. You will see communities going vertical around these transit hubs that we will have around LA.’

Gil first discovered photography when his father gave him a camera at the age of 13. The last thing on his mond however was becoming a professional. ‘The first thing I wanted to do in my life was be a garbage collector. I loved watching the garbage man hang off the truck and collect the garbage.’ In 6th grade his class heard from a lawyer about their profession and Gil was intrigued. ‘I went home that evening and said I don’t know if I’m smart enough but id like to become a lawyer and things worked out.’ 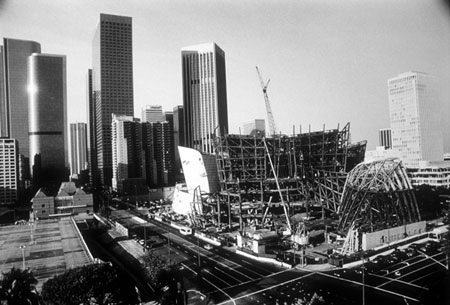 Gil ran unsuccessfully for a third term as DA and found himself unemployed. He says ‘I was 59 years old when I left office. I had a serious disease when I was 39 and met a man who was 88 who inspired me to live in good physical and mental health until I’m at least 88. I said to myself well I have at least another good 30 years left what should I do with this. I wasn’t sure until I took photographs of the then being constructed Walt Disney Concert Hall, that led to a book. The book was favorably covered by the LA Times , NY Times and that launched my career in photography.’

Gil Garcetti has spent years as a UNESCO Cultural Ambassador . He has traveled the world lecturing on bringing safe water to developing nations.

Gil’s photography essay book ‘Water Is Key’ displayed the issues involving clean water in developing nations.  ‘You have millions of people in rural communities without safe water. As a result there is death, illness and blindness. Women and young girls have to fetch water every single day. That means that women don’t go to school, and that is the tragedy of it all. Safe water changes everyone’s lives. Girls go to school and women become successful. There is plenty of safe water in West Africa but it is subterranean. They stand on then water but they don’t have the water or professional capabilities to bring the water up and maintain the well. That is what we do. Eventually it is the large governments of Europe and the U.S. that must get involved with bringing safe water to West Africa.’

Gil credits his successful careers to the fact that he has truly devoted himself to becoming passionate about what he does. His new project focuses on photographing people in their 80’s who are truly satisfied. ‘Sure we all have faced trials and tribulations. There isn’t a person who will read this interview who hasn’t had great disappointments, great challenges in his or her life but I try, and I think I’ve fairly much accomplished an attitude on life that is positive. When you’re dealing with cancer when you’re 39, you get knocked out of your job at 59, you get knocked down but you get up, that is life. Things happen. You cannot be fearful of failing. If you fail, so what?   Every man and women has something inside them that has never come out. Find it, go with it, and live it. It will be great.